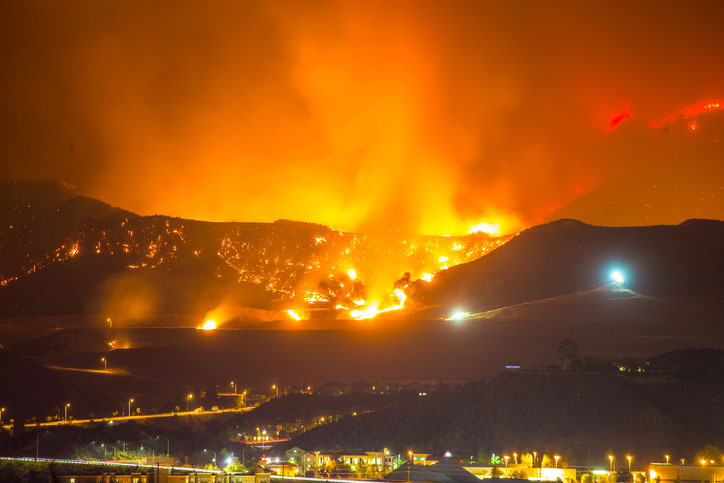 When people think about 911 dispatchers, they usually think about people with headsets sitting in a high-tech command center, surrounded by blinking lights and big computer screens, calmly and cooly coordinating between callers and emergency responders, then moving on to the next emergency.

But there are other sorts of incidents, those that don’t go away in a day or even a week, and other challenges that dispatchers can face… challenges that have come to the forefront with the recent wildfire conflagrations in Northern California.

A combination of major fire outbreaks with the immediacy of threats to hundreds of thousands of civilians has shown some of the pressures dispatchers face in rural areas that have experienced rapid population growth.

Staffing is something of a black art for all emergency services dispatch centers, since emergencies, by definition, are somewhat unpredictable. 911 dispatch centers are staffed according to formulas based on historic call levels, but also often build elaborate fallback arrangements with other PSAPs (Public Safety Access Points) to handle overflow volumes.

California, the most populous state in the country, has a massive urban interface problem as well as terrain and climate that twist together into a pyromaniac’s wet dream of combustible fuel loads, shrieking Santa Ana winds, and minimal rainfall. The combination has made for fast and horrific wildfires dating back as long as records have been kept—since the early 1930’s, at least.

This historic susceptibility to wildfires has led the state to build out the CAL FIRE organization, the colloquial name for the California Department of Forestry and Fire Protection. You can tell where the emphasis on mission is at from the fact that agency dropped “Forestry” from the informal name in 2007… and for good reason. CAL FIRE is the largest full service, all risk fire department in the western United States and operates more fire stations than the New York, Los Angeles, and Chicago fire departments combined.

CAL FIRE is the largest and most robust state wildland firefighting agency in the country and both crews and dispatchers are well-practiced when it comes to responding to the state’s typical array of wildfires each year. CAL FIRE crews respond to an average of 5,600 wildfires each year, covering more than 172,000 acres.

But the Napa Valley fires—later collectively labeled the LNU Complex fires, after the CAL FIRE code for the Sonoma-Lake-Napa operational unit where they started —pushed CAL FIRE and local department dispatchers to the breaking point.

Windstorms Led To A Wave Of Emergency Calls

Winds gusting as high as 75 miles an hour blasted Napa Valley and the Sonoma foothills on the evening of October 8th, snapping trees and knocking down power lines. With conditions dry and warm after a summer that baked moisture out of the vegetation, it seemed fires were inevitable, and the calls began coming in around 9:20 p.m.

The Napa and Sonoma County PSAPs under the operation of the Napa police department and the Sonoma County Sheriff were inundated with calls. Responsible for a patchwork of local communities, cities, and unincorporated areas, fire calls may be dispatched directly or relayed to other dispatchers in the area, including the CAL FIRE LNU ECC (Emergency Command Center).

By 10 p.m., too many calls were coming in for dispatchers to handle. Those getting through were a litany of personal disasters that firefighters were too overwhelmed to address: elderly residents unable to evacuate on their own… people whose houses caught fire before they were even aware that an evacuation had been ordered… people trapped in cars, swimming pools, lost, or injured.

A full accounting still hasn’t been done for how many of those callers were rescued and how many died. The possibility that a caller might not have gotten the help they needed is a thought that haunts 911 call-takers.

Overwhelmed By The Speed and Ferocity of the Fires

The robust and wide-ranging coordinating system for wildland fires has created a web of regional, national, and even international mutual aid agreements for resources. But multiple fires around the region all within 200 miles – Mendocino Lake Complex, the NEU Wind Complex, and the Table and Creek fires – quickly sapped resources. According to the LA Times, around 10 p.m. a chief rolling up on the Napa fires immediately requested 100 additional engines… but scrambling dispatchers could only come up with 50 to send.

Wildfire dispatchers, however, are accustomed to working on different scales and different timelines than most emergency dispatchers. They are logisticians, customizing responses based on resource availability, terrain, and weather. Great conflagrations in the American West can only be managed, not directly extinguished. Campaigns to put out wildfires are measured in weeks, and sometimes months, giving dispatchers time to make resource requests from regional and national coordinating centers, like the Northern California Geographic Area Coordinating Center in Redding.

When those fires are burning in distant forests, this system has proven extremely effective at marshaling and managing resources for fighting them. But urban interface fires are different: lives and structures are threatened immediately, and trading acres for time to assemble strike teams is not an option.

The Fires Moved Too Fast For Emergency Alerts

In situations where fires outstrip the ability of departments to respond to every call, evacuation is the only option. But emergency alerts proved largely ineffective in California in October 2017.

The Sonoma County Sheriff sent out an alert at 10:51 p.m. on Sunday night via the privately operated Nixle system, a service that requires residents to sign up for notifications. But few people reported receiving the message, perhaps in part due to the rapid advance of fires burning over cell sites and knocking out the electrical grid.

Both Sonoma and Napa counties attempted reverse 911 robocalls, but those were similarly ineffective. Neither county activated the national Wireless Emergency Alert (WEA) system, used to send out Amber Alerts and other emergency information to cell phones.

A mishmash of alert systems, including robocalls, Nixle, and SoCoAlerts didn’t penetrate the confusion of the evening and some residents only learned of evacuation orders when thinly-stretched fire and police units drove through their neighborhoods making loudspeaker announcements. Others, unfortunately, received no alerts at all.

Issues like these will continue to challenge 911 dispatchers as the population continues to expand on the outskirts of major urban areas and interface fires become more and more common. The hybrid demands of protecting life and property compared to traditional methods of fighting major wildfire conflagrations do not allow for easy answers, but improving dispatch coordination and emergency notifications will surely be among the lessons drawn from the October 2017 California fires.